Ideas for a Pong-platformer Mashup

I have been hoping to make games, but I have never finished a single project I attempted. So this time I thought, enough is enough. I will release this!

And so I intend to take the first steps by making something simple, and come up with an idea for a game: what if I take Pong and put a platformer in it? 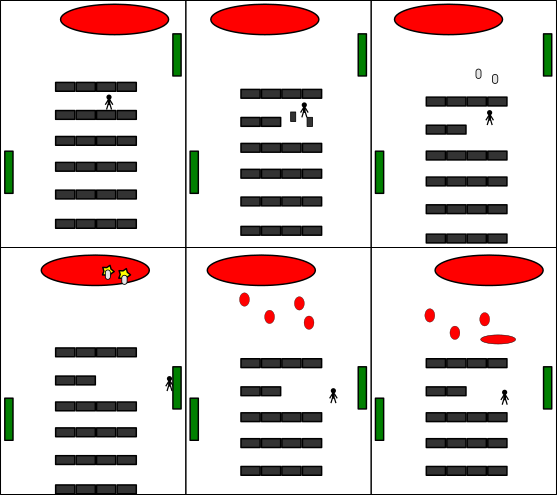 The main goal of each stage is to "chase" the big red ellipse off the screen, which I took inspiration from the bizarre Donkey Kong III.

In Donkey Kong III, you shoot the titular ape with a bug spray while running about on the platform steps. Bugs will fly down and try to pick the flowers, which you must prevent because they're actually your remaining lives.

In that stage in the screenshot, you have to repel Donkey Kong by shooting at him repetitively as he slowly ascends by climbing up as he tries to stay away from you. Keep it up by shooting at him as much as possible until he goes off the screen and you'll win the stage. If you don't shoot at him much, he will slowly descend and eventually falls to the ground and stomp you flat.

I started by playing around with the whole idea by making this. Note that here the bullets fall downward.

But nah, I think I should just stick with shooting up. Then I put in an alien ship that makes platforms at random for the player to run on. Note that I haven't made the enemy feel pain yet.